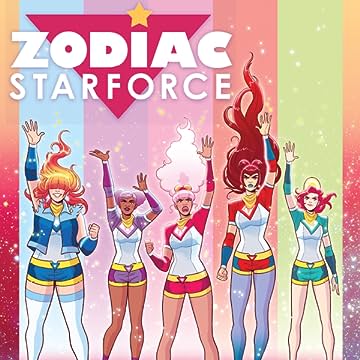 High school is anything but average for this gang of demon-fighting magical girls! The team forms a surprising alliance with their secretive UK counterparts to save their town and themselves! After defeating a former Zodiac Member and her mean-girl minions, the girls thought they'd catch a break! But once a mean magical girl, always a mean magical girl and Libra's former best friend wants that power back! Determined to bring the goddess Cimmeria into our dimension, her coven opens a portal to the dark dimension Nephos, only they don't get what they bargained for. A new big-bad has come out to play and demons begin to overrun the town! Zodiac Starforce discovers they aren't the only Zodiac team in the game and together they form a tenuous alliance to find out who's behind the demon infestation. The series Comics Alliance calls "your favorite new magical girl team" returns with even more laughs, crushes, and monsters in their latest adventure! Collects Zodiac Starforce 2 #1-#4.