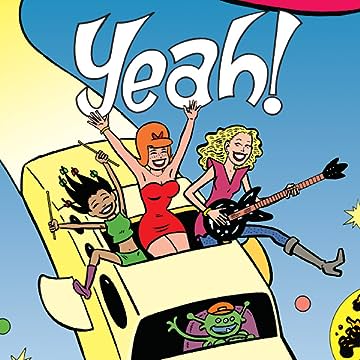 Co-created by comics living legends Peter Bagge (Hate) and Gilbert Hernandez (Love & Rockets), Yeah! is a unique masterpiece of all-ages fun. Originally published as a nine-issue comic book series from 1999-2000 by DC's Wildstorm imprint, this all-ages gem (approved by the Comics Code Authority, no less!) is collected here for the very first time. Krazy (vocals and guitars), Honey (drums) and WooWoo (keyboards) are the members of the pop band Yeah! They've achieved intergalactic superstardom on every planet but their own (Earth), where they live in anonymity and suffer indignities in their home of suburban New Jersey. The girls struggle with bad gigs (struggling to win $200 amateur-night contests despite playing to packed crowds of adoring fans on Uranus), aliens who have crushes on them, and rival boy band The Snobs.