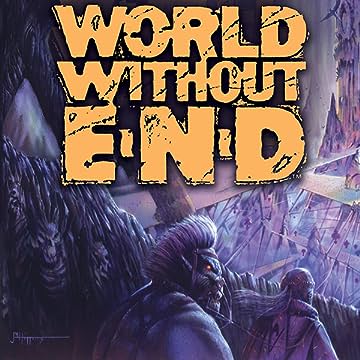 Millions of years in the future, a new world emerges — a world made of living flesh, surrounded by acidic seas. Rotten at the edges, awash in gangrene swamps, and bristling with mountains of bone, the planet's simmering core houses the stark city of Bedlam, where an all-male race suppresses every manifestation of femininity. In this magnificently illustrated dreamscape of brutality and eroticism, a mysterious female presence called Rumour arises to challenge super-commando Brother Bones in a deadly war between the sexes. World Without End offers a compelling blend of science-fiction allegory and fantasy adventure. Author Jamie Delano's unique vision of a strange, immersive world is perfectly complemented by John Higgins's stunning illustrations. The epic tale was originally published by DC Comics as a six-part series. This edition is its first single-volume publication. Suggested for mature readers.