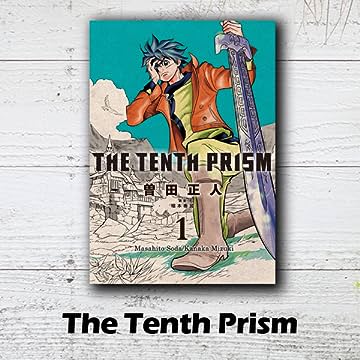 "In a distant time, a small country -- the "Land of Bones" -- discovers a strange technology, and plunges the world into fear and despair." Since the dawn of time, the Kingdom of Karan -- loved by its inhabitants and neighbors alike -- has existed in peace and in harmony with nature. But now, the kingdom has fallen and its citizens have scattered. Karan's sole hope? A small boy -- Prince Tsunashi. Despite his reluctance to accept the challenges of reviving Karan, Tsunashi's right eye patch hides the mark of the prophesied savior: THE EYE OF GOLD. Threatened by the intensifying advance of the fearsome and mysterious Land of Bones, a skillful ploy by a vassal allows Tsunashi to discover and harness his legendary ability hidden underneath the eye patch -- and fight to save his kingdom.From bestselling author Masahito Soda, creator of "Firefighter! Daigo of Fire Company" (8.3 million copies sold) -- and the kart racing manga Capeta (6 million) -- comes THE TENTH PRISM. Soda's new epic fantasy marks his entry into the genre and is certain to be yet another masterstroke for this author. This series has been published in Japan since 2014 which Japanese title name is "Ten Prism"