The Structure is Rotten, Comrade 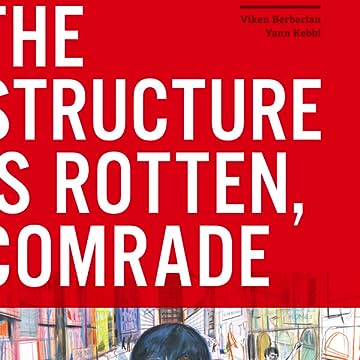 The Structure is Rotten, Comrade

More in love with the alluring properties of cement than he is with his girlfriend, Frunz’s overriding ambition is to become the next legendary architect. If only life was that simple. His father, known as Mr. Cement, is a builder in bed with the autocrats who run Yerevan, the capital of post-Soviet Armenia. As father and son team up to transform the city into a post-modern mecca of Trumpian high-rises, outraged citizens rise up in Revolution against them and Yerevan’s corrupt regime. Will Frunz and his father realize their architectural dreams or come crashing down to Earth in the chaos of the Revolution? Written by Viken Berberian with his signature originality and verve and drawn with audacious compositions, delirious colors, and a kinetic expressionistic technique by the acclaimed painter and illustrator Yann Kebbi, The Structure is Rotten, Comrade is a formally innovative and politically resonant work, by turns prescient, punchy, cautionary, and fearless.