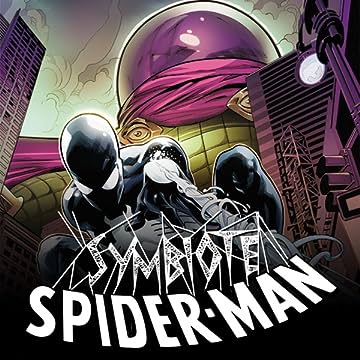 Collects Symbiote Spider-Man (2019A) #1-5. Back to black! Everyone knows the infamous living costume Spider-Man accidentally brought back from the Secret Wars eventually became the wicked web-slinger known as Venom — but what happened before Peter Parker discovered the suit’s sinister symbiotic secret? Find out in this dynamic tale from comics legends Peter David and Greg Land! Set during the original “Alien Costume Saga,” this all-new story pits the black-suited wall-crawler against that most mystifying of menaces: Mysterio! Uncovering a shameful secret from the Black Cat’s past, Mysterio may have found the blackmail necessary to get close to Spider-Man’s remarkable new suit — and in doing so will set Felicia down a path where any misstep could result in her losing Peter forever! Is this the beginning of the end for Spidey and the Cat?