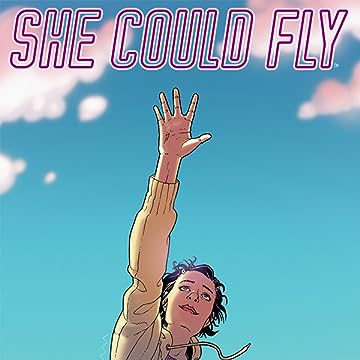 An unknown woman flying at fantastic speeds and spectacular heights suddenly explodes mid-air. No one knows who she was, how she flew, or why. Luna Brewster, a disturbed 15-year-old girl, becomes obsessed with learning everything about her while rumors and conspiracy theories roil. Will cracking the secrets of the Flying Woman lead to the liberation of her troubled mind? By Christopher Cantwell (co-creator/showrunner of AMC's Halt and Catch Fire) and artist Martín Morazzo (Ice Cream Man) with color by Miroslav Mrva. Collects the four issue critically acclaimed series in a deluxe softcover edition. ''She Could Fly is a modern-day masterpiece... It's heartbreakingly beautiful and honest to its core.'' – Aaron Paul (Breaking Bad) ''Full of unexpected pleasures . . . masterful, joyful, poignant . . . A must- read'' – G. Willow Wilson (Ms. Marvel, Air)