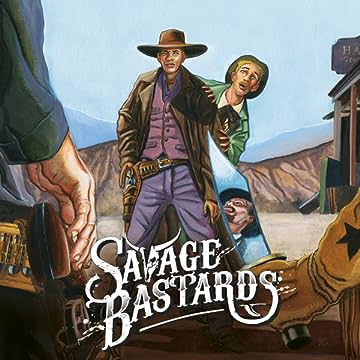 Journey to the Red Sands with two Savage Bastards in a hail of bullets! Newcomers David Galiano and Carlos Angeli craft a tale of mud, blood, guts, and glory in this new action-adventure story. Two unlikely heroes, the Savage Bastards, are fueled with revenge and driven by a rescue mission across the open frontier of the wild west. The story of half-brothers Sam and Elliot is told with rich and authentic dialogue, gritty art, and fast-paced action sequences. Savage Bastards is an immersive period piece and a love letter to the wild west and the gunslingers who inhabited it. A story of brotherhood, revenge, and betrayal, Savage Bastards is set in the 1870s. Follow Sam and Elliot as they fight across a series of satellite towns in the Sonoran Desert in order to save Elliot's mother from their sadistic, sociopath of a father, Darragh MacDougal and the rest of his crazy bastard children.