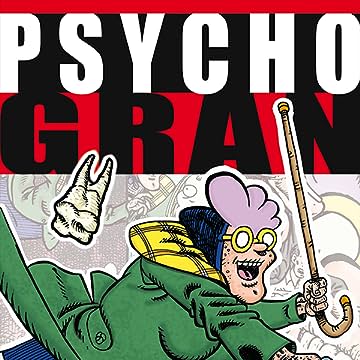 First published in the cult British kid's comic Oink! back in 1986, Psycho Gran is the psychotically demented brain-child of cartoonist and comic book editor, David Leach - winner of Channel Four's Come Dine With Me, editor and writer of the Wallace and Gromit newspaper strip and the Adventure Time comic magazine and editor of Roman Dirge's Lenore. David is also the co-creator of cult 1990's strip The Driver for British comic Toxic! Psycho Gran (or Psycho Besta as she's known in Norway) is a five-foot high, mauve-haired, bespectacled, psychotic granny with a pan-dimensional, sentient handbag called Percy, a flying dog called Archie and a pathological loathing of rudeness. Join her for an all-new, 29-page, full-color journey into a surrealist slapstick world of rampaging kaiju, neo-Nazi skinheads, bag-snatchers, death-row inmates, explosive diarrhoea and those annoying SOBs who will insist on using their bloody cellphones in cinemas. She puts the Old into Old Skool Kicking! "While old comedy comic characters wither in the creaking care home of bad stewardship, David Leach's old but un-withered, bad, batty, toothless, ruthless, fearless, frightening, horrible, hilarious, Psycho Gran marches on in her surgical stockings, getting stronger by the day. Bless him!" - David Lloyd, artist and co-creator of V For Vendetta.