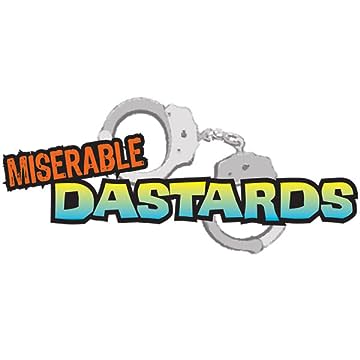 das•tard (das'tərd) n. 1. a despicable coward. 2. a super-villain's henchman, usually incompetent. They're not heroes. They're not even villains. They're Dastards - the poor saps in the matching outfits who case the joint, assemble the elaborate traps, and take gloved punches to the face while the real bad guys escape. All these henchmen-for-hire want is to pay their mortgages, put their kids through college, and maybe throw some nice steaks on the grill every now and then. But after suffering one humiliating defeat too many, three daring Dastards stop taking orders and start scheming their own criminal capers... Written by Richard A. Hamilton (Return Of The Super Pimps) and illustrated by Harvey Award-winner Jeremy Dale (Image's Popgun vol.1) and inker Rob Jones (Perfect Storm), MISERABLE DASTARDS Vol. 1: Punching Bags shows what happens when blue-collar thugs reach for the stars... and have every hero and villain in Philadelphia out for their blood! "Something new and exciting... one of those rare books that never feels indy. Amazing artwork and story with great production values... It's a damn good comic that will keep you guessing and smiling long after you've put it down." - Ain't It Cool News "Hip dialogue and crisp art make this a fun read!" - Dick Giordano, Comics Legend