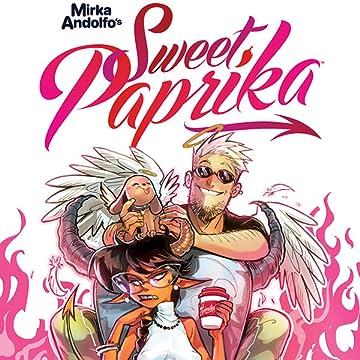 Paprika is a successful New York businesswoman. She neglects her personal life and relationships in favor of pursuing her career. Her heart was broken by an old flame, and her rigid upbringing has made her introverted to a debilitating degree. Despite all this, she still wants a romantic relationship—she just doesn’t know what she’s doing. Not like Dill, the handsome delivery boy with an angelic attitude who’s always surrounded by besotted women. He doesn’t have a worry in the world, and that makes Paprika very nervous. But maybe he’s the guy who can help her with her feelings—and with sex. Bridget Jones’s Diary meets Sex and the City with a pinch of The Devil Wears Prada in the new international hit by acclaimed creator MIRKA ANDOLFO (UNNATURAL, MERCY). Collects MIRKA ANDOLFO’S SWEET PAPRIKA #1-6