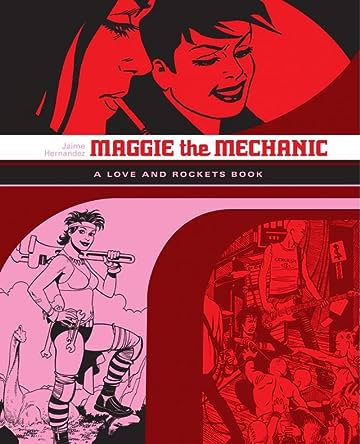 The entire collected "Locas" saga (to date) by Jaime Hernandez stars Maggie, Hopey, their friends, families, rivals and lovers in 5 digital volumes, offered here at a special package price! Maggie the Mechanic includes the earliest, punkiest stories with a heavy science-fiction bend. Meanwhile The Girl from H.O.P.P.E.R.S. centers on one of Jaime's peaks, "The Death of Speedy," and various love triangles. In third volume, Perla La Loca Jaime drops a narrative bomb on Hopey, a murderous hooker AND an amorous lady wrestler appear; and Maggie gets married? The fourth volume is all about Penny Century and returns to the wrestling ring for some real fun followed by the fifth volume (but not final) Esperanza in which an older and wiser Maggie faces down her demons, Hopey transitions from tending bar to tending schoolkids, and Ray tussles with the volatile bombshell Vivian. A perfect gift item for a long-time fan or a new reader. "One of the most talented artists our polyglot culture has produced." - The New York Times Book Review