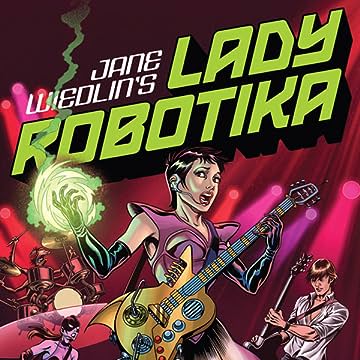 Aliens from a distant planet abduct rock star JANE WIEDLIN (The Go-Gos) and force her into playing a concert for their Earth-obsessed emperor. On the trek back to their planet, they implant her body with nanobots as she sleeps, but, their plan to turn her into one of their cyborg slaves backfires when Jane learns to control the Nanites within her and becomes the super-powered cyborg liberator, LADY ROBOTIKA! A NEW OUT-OF-THIS-WORLD SHOCK SENSATION! JANE (THE GO-GO'S) WIEDLIN TEAMS UP WITH BILL (THE SIMPSONS) MORRISON TO CREATE A SEXY AND FUN COSMIC ROCK AND ROLL FANTASY!