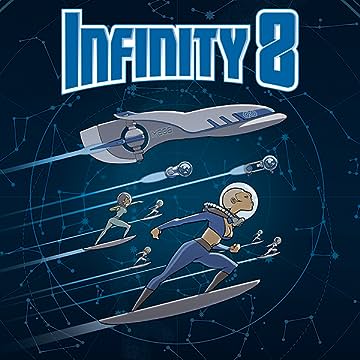 The city-sized, deep-space cruise ship "Infinity 8" stops halfway en route between the Milky Way and Andromeda, blocked by a massive field of debris containing wreckage and artifacts from countless planets, cultures, and possibly dimensions. The captain of the ship calls upon eight of the ship's top security to investigate the anomaly, each one sent out in a parallel time loop to collect information which can then be assembled to hopefully discover the truth before disaster erupts. Each time loop lasts only eight¬†hours, at which point things snap back to the way they were when they started, leaving the agents with no memories of their time in that window. Can the eight¬†agents solve the mystery without making things worse? Danger reveals itself within the interspecies population on the ship, some of whom may know more than they lead on . . . The first volume introduces us to the crew and captain of the Infinity 8 as they first encounter the anomaly, and the first security agent‚Äîthe brassy Yoko Keren‚Äîis sent out on the case. But she's too preoccupied by her own relationship woes (or lack-of-relationship woes) to focus on the job. When a race of necrophagous aliens follow her into a floating graveyard, they begin to assimilate the criminal and violent behavior of the corpses they devour. With their attention turned back to the ship itself, Yoko has to find a way to stop them from destroying the ship before her time loop expires.