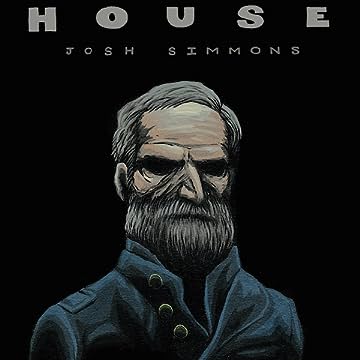 This adventurous, silent graphic novel demonstrates the solid strength of this young cartoonist's storytelling ability. Whether plunging into the watery depths of a sinkhole that has obviously swallowed part of a town or entering the uncertain hidden corridors of the house, every turn is captured with intensity by Simmons' scratchy pen. Page composition and panel arrangements are masterfully coordinated to reflect the characters' increasingly claustrophobic panic as the story reaches its crescendo, and to cause a similar and palpable reaction in the reader. House is Josh Simmons' first full-length graphic novel after years of honing his craft on the humorous, underground comic series Happy, and it is a visual and formal tour de force that proclaims Simmons a major cartooning talent of the new century.