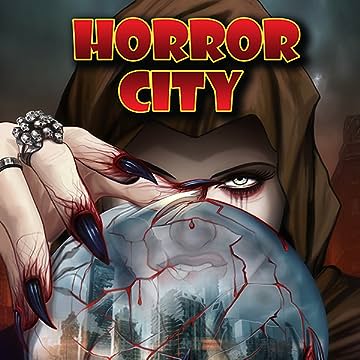 A team of American and International comic artists and writers has been brought together to create, Horror City, a unique horror anthology loaded with terror, black humor and twist endings. All the stories take place in the fictional ""Payne City"", a place where anything can happen and in which many of its deranged citizens are without a doubt, the worst kind of monsters. In the tradition of Tales from the Crypt, Night Gallery, Twilight Zone, and Tales from the Darkside. Horror City issue #1 includes 3x eerie stories. "THE CURIOUS CASE OF BECKY THE BUTTON KILLER": As the name might hint the story is a black humor parody of Fitzgerald's "The Curious Case of Benjamin Button". Father O'Flanaghan is about to visit one of the dead row convicts inside a federal maximum security jail who's about to be executed that very night. As O'Flanaghan enters the cell he's stunned to discover that the convict is a five year old girl! In story #2 "BAD BLOOD" we join a sadistic captain working in a concentration camp. After shooting a prisoner he discovers that whatever he does he can´t wash the prisoner's blood of him. The last story is "WHEN ANGEL´S DESERVE TO DIE", Sam is a bounty hunter but not a regular one. He hunts down renegade angels who have gone AWOL. He will find out that killing beautiful angel girls is a lot harder than he expected.