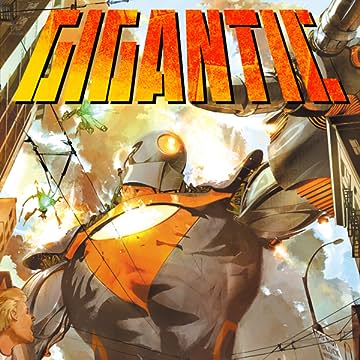 It was a beautiful spring day in downtown San Francisco before a gigantic armored alien appeared from out of nowhere and began smashing things all to hell! Who is this invader? Why is he being attacked by strange alien beings? And why is he so GIGANTIC? A twist on The Truman Show, Gigantic focuses on a brainwashed, alien superhero deposited on Earth to be the spotlight of an intrusive, around-the-clock television program being filmed without his knowledge. Critically acclaimed writer Rick Remender (Fear Agent, The End League) teams up with groundbreaking artist Eric Nguyen (X-Men, Sandman Mystery Theatre) in the merging of big, visually exciting art with a story examining America's consumer-based culture. Sci-fi thrills and superhero action from the one and only Rick Remender!