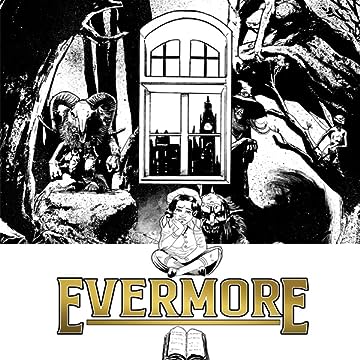 In post-war London, in a city devastated by plague, an ancient book lies hidden-- one said to be even older than England and believed to serve as a nexus to the fabled world of Evermore. A precious few have gone there, fewer still have ever returned alive to tell the tale. Yet, when the grieving Doctor Fredrick Fellowes visits a dying friend on Christmas Eve, he is gifted the book to give to his young daughter, Abigail. But when the child reads from the tome, she becomes trapped within its darkest recesses. In hopes of ever seeing her again, Fredrick risks everything to venture into the unknown storybook world to bring his little girl home. Here begins the harrowing adventure of family, loss, horror, and magic, done in the spirit and black and white style of the pulp magazines from the 1960s.