Drawn to Berlin: Comic Workshops in Refugee Shelters and Other Stories from a New Europe 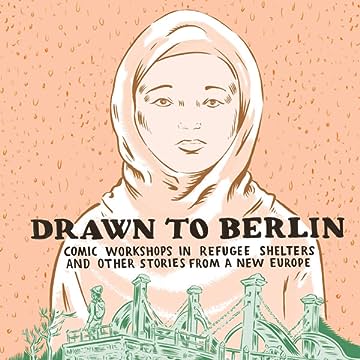 Drawn to Berlin: Comic Workshops in Refugee Shelters and Other Stories from a New Europe

Ali Fitzgerald, an American cartoonist living and working in Berlin, began teaching comics-making to refugees at an emergency shelter. People who are fleeing their homes, now warzones, arrive at the shelter and draw images of tragic violence and careful optimism: rafts and tanks, flowers, and the Eiffel Tower. In the eight years she’s been in Germany, Fitzgerald experienced the highs of the creatively hopeful, along with the deep depression of the disillusioned, all while waiting to stumble onto her own glory like the great Modernists before her. In the gigantic plastic bubble that is the refugee center, worlds collide and echo, and Fizgerald’s story entwines the complex themes of political and personal displacement. Her drawings are compassionate and unflinchingly intimate, perfectly visualizing the fantasy of her Bohemia crumbling in a globalized city. Drawn to Berlin is a stunning graphic memoir about what you find when you attempt to help lost people.