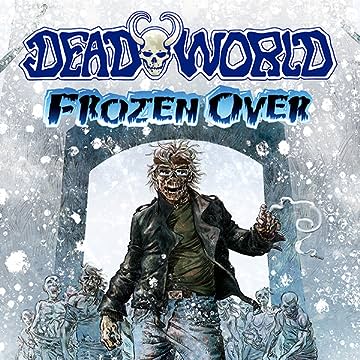 New York City... a blizzard… the world in ruin... the undead fill the city streets. Those few lucky enough to survive the initial wave of undead lie huddled together in power deprived buildings high above the streets. Kolin Fleet and his small band of survivors seek to get out of the city before the snow thaws and the zombies are roaming free once again. Unfortunately, King Zombie has other ideas. Set in the Deadworld Universe. Written by Mike Raicht (Marvel's Zombie and Savage Tales) with art by Federico Dallocchio (Batman: Arkham Unhinged, Star Wars, DC's Suicide Squad). Critics love Deadworld: "...amongst the most essential horror titles of the last twenty years." - Peter Normanton, From the Tomb magazine. "This is the original zombie comic and it's easy to see why it's lasted so long." - World's Heavyweight Comics. "The best, in my humble opinion, of the zombie comics." - Tom Snigoski, Buffy the Vampire Slayer