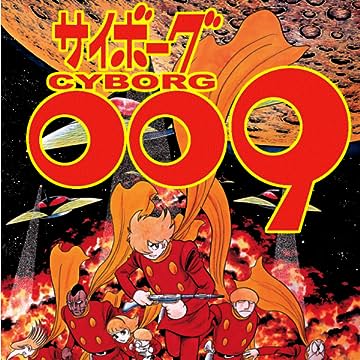 Spreading the seeds of war and reaping huge profits by selling weapons to warring nations, the organization of death merchants known as BLACK GHOST plots to dominate the world! With an eye toward super-stratospheric war, they draft a secret plan to develop an invincible warrior, the Cyborg Soldier. Gathering nine young people from various countries around the world, they create a prototype cyborg, the 00- series, for the purpose of mass producing an army of unstoppable killing machines. Appalled by the twisting of science to such evil purposes, Dr. ISAAC GILMORE escapes from the organization, taking the nine cyborgs with him. These nine youngsters must struggle to overcome the trauma of their transformation into cyborgs and fight back against Black Ghost with all the powers at their disposal. The peace of the world depends on them! Story of group of abducted and reconstructed youth from various countries who escapes with help from a kind scientist, and who fights with the evil, international arms trader, Black Ghost. They were forced to be reconstructed into cyborgs. They did not form the group, because they liked one another. Ishinomori depicts the sorrow and struggles of each of those cyborgs due to the differences amongst their nationalities, races, ages, and sex. They fight for someone that goes beyond their sufferings, but they can never go back to their lives before they were turned into the cyborgs.