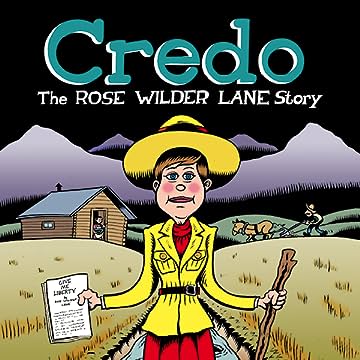 "The life story of the feminist founder of the american Libertarian movement Peter Bagge returns with a biography of another fascinating twentieth-century trailblazer—the writer, feminist, war correspondent, and libertarian Rose Wilder Lane. Following the popularity and critical acclaim of Woman Rebel: The Margaret Sanger Story and Fire!! The Zora Neale Hurston Story, Credo: The Rose Wilder Lane Story is a fast-paced, charming, informative look at the brilliant Lane. Among other achievements, she was a founder of the American libertarian movement and a champion of her mother, Laura Ingalls Wilder, in bringing the classic Little House on the Prairie series to the American public. Much like Sanger and Hurston, Lane was an advocate for women’s rights who led by example, challenging norms in her personal and professional life. Anti-government and anti-marriage, Lane didn’t think that gender should hold anyone back from experiencing all the world had to offer. Though less well-known today, in her lifetime she was one of the highest-paid female writers in America and a political and literary luminary, friends with Herbert Hoover, Dorothy Thompson, Sinclair Lewis, and Ayn Rand, to name a few. Bagge’s portrait of Lane is heartfelt and affectionate, probing into the personal roots of her rugged individualism. Credo is a deeply researched dive into a historical figure whose contributions to American society are all around us, from the books we read to the politics we debate."