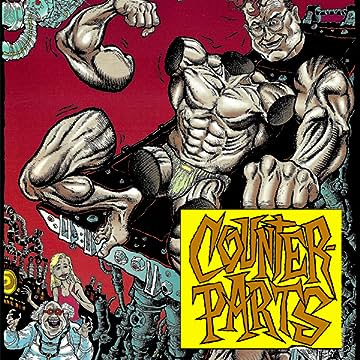 A Story in Three Parts, a Character in Six. Think people can be disingenuous? Of course they can and in the future they try on new personas like hats. Unfortunately, Hieronymus Jones overdoes it with the TPGs (temporary personality grafts), leaving his original personality utterly destroyed. That would be okay, since he’s kinda boring, until an experimental cure gives him not one, but six new permanent personalities. Rather than fight over territory, each inhabits a different part of his body, and soon finds they can break apart at will! There’s: Bogey, the hard-boiled right arm; Kik-li, the Kung-Fu master right leg; Jake, the self-involved torso; Buckley, the too-smart head; Don, the romantic left arm and; Tootsie, the femme fatale left leg! Together, they fight corruption and crime as the strangest superhero team ever! In this issue: "The Sum of the Parts", the newly disassembled Counter-Parts learn that TPGs are being made from… people! Yeah, kinda like Soylent Green, but here, to be precise, it’s the homeless being culled for their personalities – which means the team can actually find out who they once were! Written by bestselling author Stefan Petrucha.