Beatles with an A 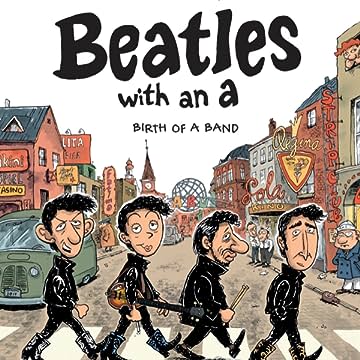 Beatles with an A

These are the first beats of the Beatles' career as only legendary rock cartoonist Mauri Kunnas could tell them. Hilarious moments and details that even dedicated fans won't remember having heard before are all told with Kunnas's characteristically raucous humour and virtuosic drawing skills. The riotous tale of the first hesitant steps of the world's most famous band. From rocking-horse to the recording studio in Abbey Road, where the first singles were laid down. It is a story told thousands of times over, but never in quite such a wacky screwball manner as this. The cover depicts John, Paul, George and Ringo crossing the street Abbey Road style, but the street's in Hamburg's seedy Reeperbahn red-light district. Flip the book over and you'll see two more characters in the procession: Pete Best and Stuart Sutcliffe. Kunnas chronicles the band from Ringo's birth (against a backdrop of the Luftwaffe shelling Liverpool) through the release of their hit, "Please Please Me / Ask Me Why." In the penultimate frame, George Martin speaks via intercom from the control room into the studio: "Congratulations, fellas! You have just recorded your first chart-topper!" And indeed they had. Focusing on the band's pre-fame days in a sly and irreverent style (and not shying away from Brian Epstein's fixation upon of John), Kunnas makes liberal use of corny in-jokes and hokey wordplay, but it's all done in good fun.