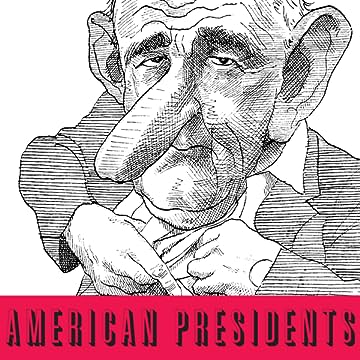 For more than a half century, David Levine has taken on the most powerful men of the free world with only his pen and a bottle of India ink. That pen has proved to be mightier than the sword as Levine skewered, illuminated, satirized and condemned every president of the 20th century, as well as the most significant presidents from colonial times and the Civil War era. His drawing of Lyndon Johnson revealing a scar in the shape of Vietnam is considered one of the most recognized (and most copied) of the Vietnam era. His devastating wit and delicately cross hatched drawing have exposed the venality of the Nixon administration, the phoniness of the Reagan years, the duplicity of the Clinton era, and the evil of the Bush cabal. Nine administrations have come and gone during Levine's tenure, and with a new one on the horizon, the artist remains, unbowed, unfazed, and unrelenting.