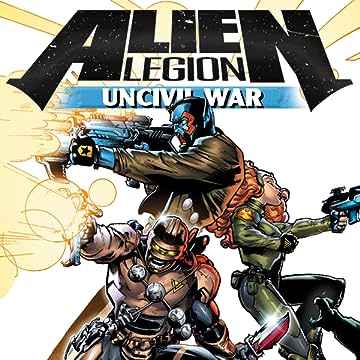 "Terse, tense and compellingly action packed." - Comics Review The classic series returns, blasting its way into an all-new battle-scared, laser-ravaged adventure! In a galaxy savaged by strife, torn by civil war, boiling with spilt blood, Alien Legion is a cosmic military force doing its damnedest to keep the peace by being always ready for war. At the tip of the Legion's multi-species spear is Force Nomad - the worst of the worst fashioned on the white-hot forge of battle into the best of the best. Now the squad's grizzled veterans are on what should be a boring milk run; shepherding refugees fleeing a civil war ripping apart their system. Could be a good chance to to toughen the newbies of Nomad into soldiers... until straight-up peacekeeping descends into full-scale war! This brand-new series brings together the creative giants behind the legendary original Alien Legion stories: Chuck Dixon (Punisher War Journal, Savage Sword of Conan, Batman and the Outsiders) and Carl Potts (The Punisher, The Incredible Hulk) with fantastic art by Larry Stroman (Wolverine, The Punisher)! A must-have for any fan of the original run, this is also the perfect point for new fans to hit Alien Legion's hot LZ! Get to it, ya damn bospors!