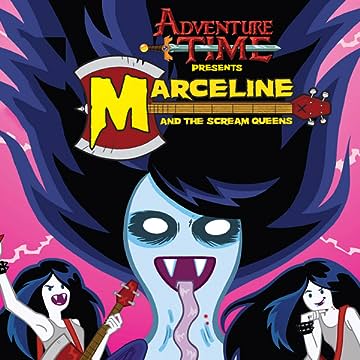 JOIN FAN-FAVORITE CHARACTERS MARCELINE AND PRINCESS BUBBLEGUM FOR RIOT GRRL ROCK-FUELED EXCITEMENT IN THIS BRAND-NEW ADVENTURE TIME MINI-SERIES! Thanks to a newfound interest in music, Princess Bubblegum joins Marceline's paranormal rock band for a tour across the land of Ooo! But when they're threatened by everything from scenesters to beasts born of self-doubt, can they make it to the RADDEST GIG EVER in time?! Written and drawn by acclaimed cartoonist Meredith Gran (OCTOPUS PIE) with variant covers by rockstar lady cartoonists Chynna Clugston (BLUE MONDAY), Ming Doyle (POPGUN), and Colleen Coover (X-MEN: FIRST CLASS)! ADVENTURE TIME #1 and #2 were INSTANT SELL OUTS! DON'T MISS OUT ON THE NEXT INSTALLMENT OF THIS ALL-AGES PHENOMENON!